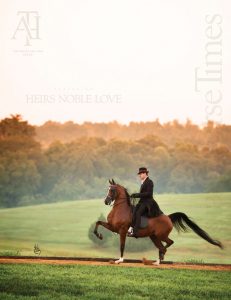 This year, the scene stealer at Scottsdale was the classy bay mare who slam dunked the show’s English Pleasure Championship finale. “Not since Summer Storm …” many veterans were saying. “Like Afires Heir!” younger ones countered, a notable reference, as the mare is an Afires Heir daughter. In a recent publication, master horseman Gene LaCroix observed that she now is the standard, probably the best ever. Even the Scottsdale judges, all of whom chose Heirs Noble Love as the champion, weighed in with praise.

For the inside story on this interesting mare, AHT spoke with her trainer, Joel Kiesner.

After Scottsdale, some very qualified people said that Heirs Noble Love may be the greatest English Pleasure horse ever. How do you
interpret that?

It’s pretty amazing. And it’s humbling, because nobody ‘makes’ a horse like this.

I think what they are saying is something I feel. I’ve had the good fortune to ride some really great horses, some of which might be in the conversation of being the best ever, and she is absolutely one of the best I’ve ever ridden. Joey Canda said watching her was like watching an old *Bask mare—the very best of the past, and that’s a really cool thing. She is unique and extremely special.

It sounds like some people may be saying that Heirs Noble Love is, or has the potential to be, historic. Not to take anything away from any of the great English horses who have shown over the past 35 years (or before), but people who watched FF Summer Storm still talk about it. If that’s the case, Heirs Noble Love may offer a rare opportunity to watch history being made. What is your take on that?

Only time will tell, and although I may feel that she’s historic, I’m not the best one to say, since I sit on her most of the time. In the real sense, I have to let other people be the judge of that. But it’s nice to hear!

What I can say is that a lot of people have told me that they delayed their trip home to watch her show. And then later they have told me, ‘wow, so-and-so told me not to miss this, and wow, they were right.’ So, I’ll leave the judgment of how great she really is to time and public opinion.

Why do you think people are so impressed with her?

She checks every single box, which is pretty unusual for a horse. She’s a joy to look at standing in the crossties—just doing anything she’s beautiful. Does she trot as high as any of the past six national champion open English horses? Yes. Does she have as good a hind leg as any in the last 10 years? Yes. Does she bridle as well as any in the last 10 years? Absolutely. Tail carriage? Yes. Ears? Verve? Yes, yes. And her purebred Arabian type is unsurpassed. You’d have to go to a halter class to find a prettier head.

And it’s effortless for her to do what she’s doing. She’s built to do it; I’ve never ridden a purebred Arabian who could suspend herself in the air like she can at a sitting trot. It’s almost like a rolling passage.

What I’ve learned over the past year is that she knows what to do. I train her and condition her, and make parts of her body limber and strong—that’s my job. But when it’s show time, I’d better let her be her. She was born to do it. That’s what she was put on this earth to do, and I was not put here to hold her back.

She’s 7 now. Her record reflects U.S. National Championships when she was 3, 4 and 5, and this year, she also was the open English Pleasure Champion at Scottsdale and the Buckeye. How have you seen her change over the years? How is she different in 2016?

She’s gotten a lot stronger. She’s a full-on open horse now—she’s bigger and bolder, and stronger with her hind leg than she’s ever been. She’s a fully adult purebred Arabian English mare that delivers on every single question you could have.

In the past, she pretty much did one national class a year, and a local show for tune-up. This year, we showed her more to season her. It’s made her a stronger and better trained horse, and I’ve learned a lot more about her. When you’re doing only one big competition a year, there is always a little uncertainty about what’s going to happen in the class. This year has really allowed me to trust who she is now and how she’s going to react and show.

When she shows, she is effervescent; every cell in her body vibrates. She totally gets what is happening. She’s well aware of the whole show ring experience and the crowd, and she loves it. She has a really light touch on her mouth and on her sides, and she has so much energy that for such a refined, elegant mare, her power is exhilarating—and at moments, maybe overwhelming.

I’m the luckiest son-of-a-gun in the world to be able to show her at all, and as many times as I have. It’s pretty rare and it happens only because her owner, Karlton Jackson, loves her and understands that you can breed for another hundred years and not duplicate it. He appreciates her for exactly what she is.

You’ve told a few people that the story of Heirs Noble Love is important for two reasons. One, of course, is the mare herself and how good she is. What is the other?

That she was bred by her owner, a small breeder who’s been in Arabians for nearly 20 years. He’s had four or five national champions now, and we’re into the fourth or fifth generation of his breeding. He’s been smart about what he’s doing, but it also takes a fair amount of luck (or clean living!). Having this mare was his dream. He hit the lottery with her.

Karlton’s been very good for the Arabian horse industry. I asked him for his take on this whole experience of breeding and showing Arabians, and this is what he said: “This has been kind of like life; it’s a journey. Breeding a horse like Heirs Noble Love wasn’t a specific destination that we started out for—it was a dream, a goal: to breed the best you could breed. You don’t think that you’re going to breed a horse that one day will have someone saying, ‘this may be the best English horse ever.’ It’s nice when you do hear that, but that was not the goal to begin with. The goal to begin with was to enjoy the Arabian horse and always try to leave things better than you found them.”

So much of what makes Heirs Noble Love and this whole experience special is Karlton. He gets that this is one moment in time—one unique moment in time. It happens so rarely in anyone’s life, that something really, really special and authentic comes into your life, and rather than just shrugging and saying it’s cool, he’s embracing it. I love that. He loves her and he’s doing all this, we’re doing all this, because she deserves it. Who knows if it will ever happen again? She’s at the top of her game, and he and his family are able to travel and share all the experiences with her.

Coming into the 2016 U.S. Nationals, do you have any thoughts about what you want from Heirs Noble Love?

This year, she has delivered some of the most dynamic performances that many people have ever seen. I want to show the crowd, a bigger crowd, exactly who she is and what she’s made of. Win, lose or draw, I’m going to let her be her best, her happiest and her most exuberant—I’m going to just let her shine